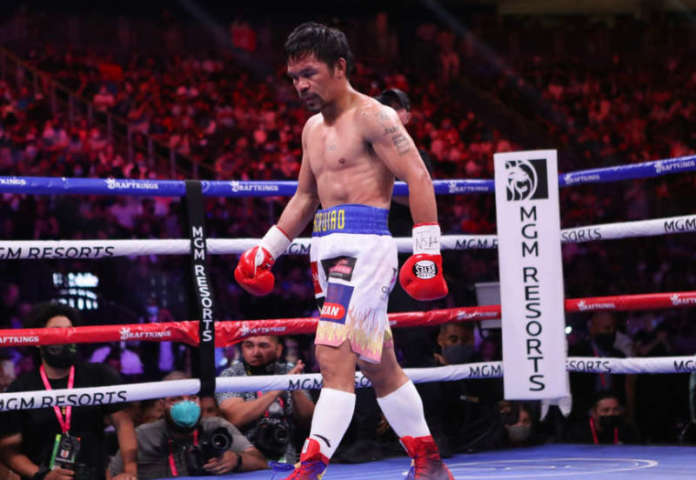 “Congratulations to Ugas and his team. Thank you to all of you. I want to thank all my fans and the media. For many decades, the press, media and boxing fans were always behind us, supporting us. That’s why we’re here, why we became popular and why we accomplished our dreams as a fighter.I am a fighter outside and inside the ring. I look forward to returning to the Philippines and helping them during this pandemic.

“In the future you may not see Manny Pacquiao in the ring. I don’t know. Let me rest first, relax and make a decision if I’ll continue to fight or not.”

“I’m very excited but, most of all, I want to thank Manny Pacquiao for giving me this moment in the ring today. I told you, I am the champion of the WBA and I showed it tonight.

“I’m very emotional. A lot of people say Cubans can’t win the big fight. So, I’m very proud that I got this win for Cuba and showed what we are all about.

“My trainer, Ismael Salas, and I had a plan. We were going to move him around, we were going to use the jab and keep him off balance. That was the whole gameplan.

“The right hand was a shot I had planned to use on Manny. It kept working so I kept using it.

“I’m a warrior. I’ve been doing this since I was six years old. I knew deep down inside he wasn’t going to beat me tonight. I felt it coming to the fight and that’s what happened.

“I want to thank Manny Pacquiao for sharing the ring with me. He’s a legend, one of the greatest fighters that ever lived. I’ll always respect him not only as a great fighter but outside the ring. I also admire that he fights for his country as I do. I want to free Cuba.”

“Manny had trouble reaching Ugas. Manny was not able to solve Ugas’ height and reach advantage.”