Anthony Joshua proved why he is one of the best active heavyweight boxers today after outboxing and outsmarting Andy Ruiz Jr., on their rematch to reclaim his unified heavyweight belts at the debut of the Diriyah Arena in Saudi Arabia.

The British boxer who weighed 236 pounds, 11 pounds lighter than their first fight, used his speed and athleticism to outclass the slower Ruiz who added an enormous 15 pounds to his weight (283 lb).

With the win, Joshua has revived his criticized boxing career and now holds a 23 wins, 21 knockouts and 1 defeat record.

Meanwhile, Ruiz who made the biggest upset in the modern boxing suffered his second defeat in 33 wins including 22 knockouts.

“I respect Andy and his trainer so much but I wanted to put on a great master class and show that the sweet science of this sport is about hitting and not getting hit,” Joshua said.

“As I always say, I’m not perfect but I’m trying. Never a change in mentality. You know the saying — stay hungry, stay humble. I’m hungry, I’m humble in defeat and I’m going to remain humble in victory.”

Also, during the post-fight interview, both boxers expressed their interest for a trilogy. 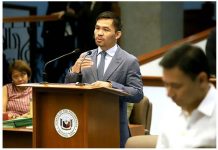