In her statement posted on her Twitter account, Robredo urged Filipinos to strive to be valiant as our forefathers who fought the colonizers and even abusive regimes.

Last year, the president did not also attend the commemoration rites in Bataan because he flew in to China to attend a business forum.

Araw ng Kagitingan (Day of Valor), also known as Bataan Day or Bataan and Corregidor Day, is a national observance in the Philippines which commemorates the fall of Bataan during World War II.

Most of these prisoners of war had their belongings confiscated before being forced to endure the infamous 140-kilometre Bataan Death March to Camp O’Donnell in Capas, Tarlac.

Along the way, thousands died from dehydration, heat prostration, untreated wounds, and wanton execution while walking in deep dust over vehicle-broken Macadam roads, and crammed into rail cars for transport to captivity.

Those few who were lucky enough to travel by truck to San Fernando, Pampanga would still have to endure more than an additional 40 km of marching while being beaten randomly and often denied food and water. Others who fell behind were executed or left to die, with the sides of the roads becoming littered with dead bodies and those crying for help. 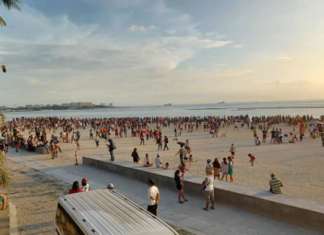