Ricky Hatton aired his worry about the plan of boxing legend Mike Tyson to box at the age of 54.

The British icon stressed the age factor that will play an essential role on Tyson’s return.

“For his age he looks fantastic in that gym – but he’s still 50-plus and I don’t want to see any of my heroes get hurt,” Hatton said.

The former multiple division champion retired at the age of 34 after a defeat realizing his body cannot do more professional fights.

Owning the experience, Hatton warned his ‘idol’ Tyson to cancel his attempt even if it is a charity fight. 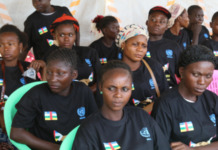