Former Astronaut Edwin “Buzz” Aldrin received mixed comments from netizens after marrying his long-time partner on his 93rd birthday. Buzz is the second person to ever set foot on the moon in 1969.

The former astronaut announced his nuptials on sunday, January 22, 2023.

“On my 93rd birthday & the day I will also be honored by Living Legends of Aviation I am please to announce that my longtime love Dr. Anca Faur & I have tied the knot,” Aldrin wrote. “We were joined in holy matrimony in a small private ceremony in Los Angeles & are as excited as eloping teenager.”

His announcement was flocked with mixed reactions online.

“Good for him… he’s over the moon with her, let them live a great life”

Aldrin was previously married three times, tying the knot with his first wife Joan Archer in 1954. The pair went on to welcome their three children: James, Janice, and Andrew, before the marriage ended in divorce in 1974.

Aldrin later wed his second wife Beverly Van Zile in 1975, but their ill-fated union crumbled just three years later. After, Aldrin found love with his third wife Lois Driggs Cannon. The pair were married for 24 years before divorcing in 2012. 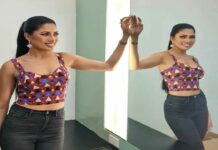