The official weigh-in between Romero Duno and Ryan Garcia came smoothly as both boxers weighed 135 pounds each.

“I told Golden Boy [Promotions] when I re-signed with them the first opponent I want to fight was the man right there [Romero Duno],” said Garcia shortly after the weigh-in. “It is a big moment for my life, a big test and I’m ready to make a huge statement.”

Garcia is unbeaten after 18 fights with 15 knockouts in total.

Meanwhile, Duno, 24, also known for his moniker “Ruthless” has 16 KOs in 21 wins with one defeat.

Asked what Garcia expects for the fight, he told Duno will live up to his alias.

“I know he will be coming non-stop but I got something for him.” 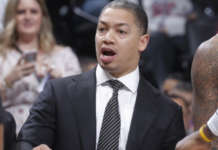