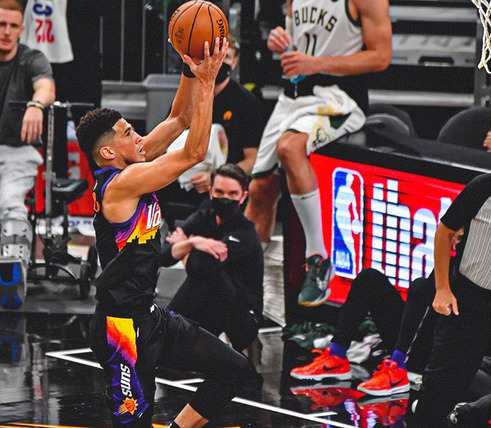 The focus at the moment for Phoenix Suns all-star Devin Booker is definitely in the NBA Finals as they continue to battle the Milwaukee Bucks.

But this doesn’t mean that he will be skipping his Olympic duty for the USA Men’s Basketball Team.

Booker is one of the three players who have yet to show up in the Olympic training because they are still active in the postseason.

However, the 24-year old reassured that even the Finals went to a Game 7, he would then book the immediate flight to Tokyo to suit Team USA.

“I’ll be there,” Booker said. “But obviously not my main focus right now.

“I saw all the guys reported to Vegas and only other place I would rather be is the Finals, but I would love to be there with the guys and I’ll be there soon,” Booker said.

He added that playing for their country especially in the Olympics is “very important” and is a “life goal of mine.”

“It’s the most prestigious event that basketball can find. So to be a part of representing your country brings you to a whole ‘nother stratosphere.”

If ever the Finals ends up in a Game 7 it will be on July 22, Booker has three days to catch up with his team in Tokyo as the Olympics will kick off on July 25.