“The good thing is we have another chance and an opportunity to keep playing,” ani Brown. “I believe I’m a fighter to the end. That’s how a lot of our guys’ minds are wired, so we just have to come out and take it one game at a time.”

“It’s win or go home time. I wish we would have played like that from the start. I take a lot of blame, you know, I didn’t play like myself in the first half. So I’ve got to be better to start the game off on both ends.” 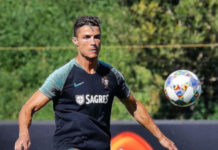