According to Go, many Filipinos continue to fall prey to exploitative illegal recruiters who impose excessive fees over false promises of employment abroad, sometimes resulting to victims becoming trapped as dues payers, and even the confiscation of their passports while employed abroad.

Earlier, Go filed Senate Bill 202 or the Department of Overseas Filipinos Act of 2019.

This legislative measure proposes the establishment of a Department of Overseas Filipinos to serve as the umbrella agency to specifically address all the issues and concerns of Filipinos abroad and their families, to afford them full protection, promote their full and just employment, mitigate the social costs back home, and serve as a channel to address OFW issues and grievances.

Once passed into law, the functions of POEA, OWWA, DFA-OUMWA, Commission on Filipino Overseas and International Labor Affairs Bureau will be transferred to this Department.

The measure further creates an Overseas Filipinos Assistance Fund to provide financial support to Filipino migrants in distress, inclusive of repatriation and provisions for life-saving funds in times of great emergency or distress, and provides training and livelihood loans for OFWs returning to the Philippines for good.

The bill also mandates the creation of “OFW Malasakit Centers” in all provinces and major cities to ensure prompt and efficient provision of services to OFWs and their families such as acquisition of government permits, validation of overseas job offers, grievance and complaints desks and reintegration services. 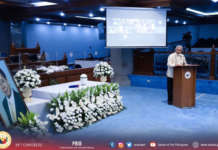