The country said that protesters should be swiftly punished as the government oversees policy towards the region.

Hong Kong’s state council and Macau affairs office conducted their first press conference since 1997, it describe pro-democracy protests as “horrendous incidents” that have caused serious damage to the rule of law.

“No civilised society or rule of law society will tolerate rampant violence,” said Yang Guang, a spokesman for the office. Yang said the violence, which he blamed on a “few radicals”, had seriously undermined Hong Kong’s prosperity and stability.

“In our view, the most dangerous situation in Hong Kong is that violent crimes have not been effectively stopped,” he added. “The most important task of Hong Kong at present is to resolutely punish violent crimes according to law, restore social stability as soon as possible, and safeguard Hong Kong’s good legal system.”

While the Chinese military has confirmed that they can be deployed anytime to Hong Kong to help maintain social order in line with the request of the city’s government, adding that Sunday’s attack on China’s government liaison office in Hong Kong was intolerable.

The violent protests sparked when Lam fought for extradition bill that would have allowed the controversial bill to extradite crime suspects to mainland China. 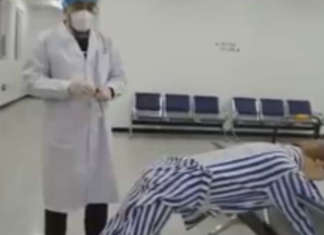